To start off the New Year, I was expecting to write about the back-to-school rush and all the good stuff that comes along with that. (No seriously, this stuff can be important.) Regardless, I wasn’t expecting to write about a convention so early on in the year. Given that the last convention in Vancouver that I attended occurred back in August of last year. To my surprise, a friend of mine told me this winter, Anime Revolution would also run a smaller convention called AniRevo: Winter. It is a one day convention held at a different location with a smaller venue. It’s hosted at Art Institute Vancouver, one of many Art Institute campuses in North America. The convention ticket sales were slated to start being sold at 9AM in the morning, but as one can see above, people were already lining up half an hour before that. 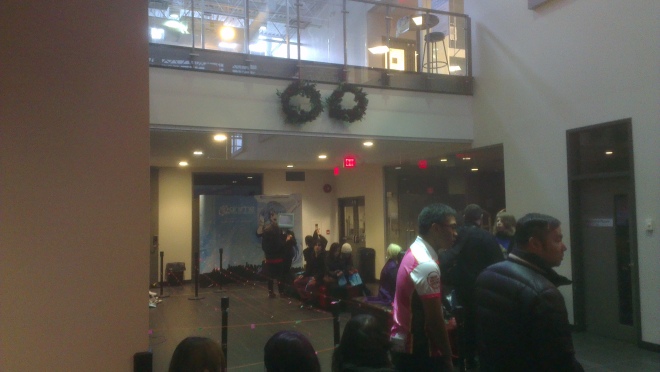 On the bright side, the line up went fairly smoothly and we were inside within 20 minutes of waiting in line from when the doors opened. There were a bunch of tables set up with people manning tablets for ticket sales. Each person was given a wristband after paying, and were required to show them in almost every area of the convention. I came here with my friend Mike and another friend nicknamed “The LewdMaster” or “Lewdson” for short. The back area pictured here is where the main event hall was located, and already had things set up for people to start lining up. I meant to drop by the first event which was The 404’s Improv group, but due to some time constraints after stepping out to grab some breakfast, the room was already filled.

Also found in the area on the second level is the Maid Cafe. Unfortunately, between going to events and spending time with my friends, I didn’t manage to enter the maid cafe which is a real shame. I had a fun time last time with Puddi back at AniRevo 2014 in August. However, I can only only assume it was just as great if not better. The venue had a small cafe and it was used and decorated to look more like a maid cafe. In addition to the cafe, there was also a fully stocked kitchen since the school also happens to have a culinary program. One can pretty much venture to say that the food served was also on par if not better than Coal Harbor Cafe which was used for the main convention in 2014.