Hello! I’m EnzoEspada and since the blog owner was away at another anime con at the time, I was asked by him to cover Anime Revolution (AniRevo) this year. To introduce myself real quick I like mecha, model kit’s, and tokusatsu. This isn’t the first time I’ve been at AniRevo, and it certainly won’t be the last time either. The con itself, I found is in a very accessible area, with several forms of transit that can bring you there quickly and easily. Most popular among the options being the two SkyTrain lines that go to and from Waterfront station, a few blocks away from the convention centre. In terms of food, there is a food court across the street from the convention centre, and many delicious downtown Vancouver restaurants within walking distance. Lastly, the AniRevo staff does listen to feedback, and I find the con improves every year and is always a blast to go to. Right then with that out of the way lets start off with Friday, August 3rd, the first day of the con. My day at the con started around 8:30 AM. After picking up coffee from Starbucks across the street, I met up with my friend [A] who was lining up to buy his 3-day pass(I had picked my pass up the day prior). While admittedly the time we set was really early, as AniRevo doesn’t let people in until 9:00 and opening ceremonies don’t start until 10:00, we thought it might be necessary considering last year’s line problems. Last year myself and [A] were victims of 2-hour lines that somehow got even worse when the lines finally split inside the venue for me who was picking up my ticket, compared to [A] who was buying his ticket. This year however the lines were split from the start, and to our great surprise, we were inside the venue with our passes within 30 minutes of them letting people in. A very welcome improvement over last year, and more than enough time to line up for good seats for opening ceremonies. 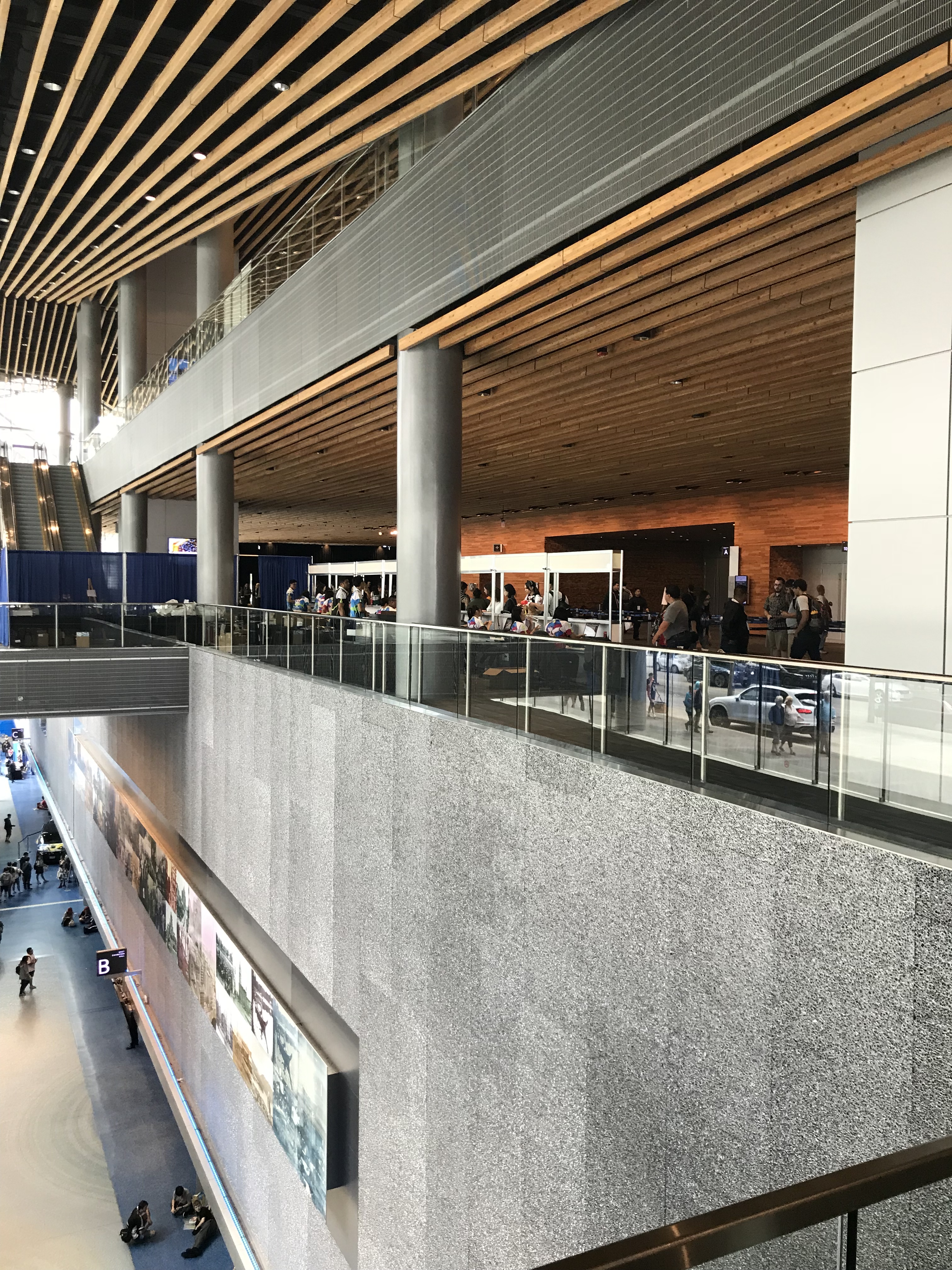 Having missed last year’s opening ceremony due to the 2-hour lineup I was glad to actually catch it this year. It was Emceed by the wonderful Jeremy, opened with a quick word of welcome from AniRevo’s chairman/founder Ken Go and the consul general of Japan in Vancouver Asako Okai. This was followed up by lovely dance numbers by the Tokimeki maids and the showing of a pride-themed AMV as part of the city’s pride week celebrations. The opening ceremony ended with a small trivia giveaway and was overall a great start to the con.

It was about 10:50 when the opening ceremonies ended, and both me and [A] decided that an early lunch was best so we could line up early for vendor hall. We grabbed food from the food court across the street and even though it was an early lunch the place was already packed.

Having had our fill of food we went and lined up for vendor hall which opened at 1PM. One of the first things we noticed as we were descending the long escalator, was the anime decoration cars were placed outside of the vendor hall this time instead of being in the middle of the vendor hall. This presumably saves them some space inside the vendor hall, plus they’re pretty nice to look at while waiting for the hall to open. Between taking pictures of the cars and asking for photographs with some of the wonderful cosplayers that showed up this year, the wait for the vendor hall opening felt pretty quick. How the line snaked across the bottom floor of the convention center was a little odd, but it moved quickly and we were inside the vendor hall before we knew it.

Compared to previous years the vendor hall’s halls were much wider and easier to move around in. There were still a lot of familiar booths, but it did feel like a lot of the smaller merchandise booths disappeared. With that said there were a lot of new great artist booths and the quality of the vendor hall is still as great as ever. Between the various booths, stage/idol shows on the blue stage, and the games area [A] and I spent a lot of our time during the first day in the vendor hall.

I did pop out of the vendor hall to attend the Q&A session of Hitomi Nabatame who was spending her birthday August 4th at the con. And yes, we did get a chance to sing to her together for her an early happy birthday. Last year I remembered a lot of the guest’s Q&A sessions eventually becoming voice line request sessions instead. This year we were asked from the get-go to keep those requests to a minimum and to focus more on questions. This didn’t mean there were no voice line requests but rather they were kept for near the end of the session when they were running out of questions. It’s a small change but a welcome improvement for these sessions.

I returned to the vendor hall afterward to meet up with another associate [M], who had just arrived at the con. We watched the idol show at the blue stage for a long time, before taking a look at the vendor booths, and then finally grabbing [A] so we could go grab some dinner. We ate at a delicious Ramen Shop called Ramen Gojiro, off of Richards and Dunsmuir just a few blocks away from Waterfront station. It was a little early for dinner but the place was still packed. We then returned to the con for a few more rounds around the vendor hall’s booths before calling it a day.