Ah, the swimsuit contest. This event was quickly at max capacity as many people wanted to watch this 18+ event. I tried to get in last year, but coming a bit late to even try to lineup meant you wouldn’t be able to make it inside. The room was bigger this year and it still managed to hit max capacity. When we got in, people were still getting settled and the judges were starting to sit down as well. 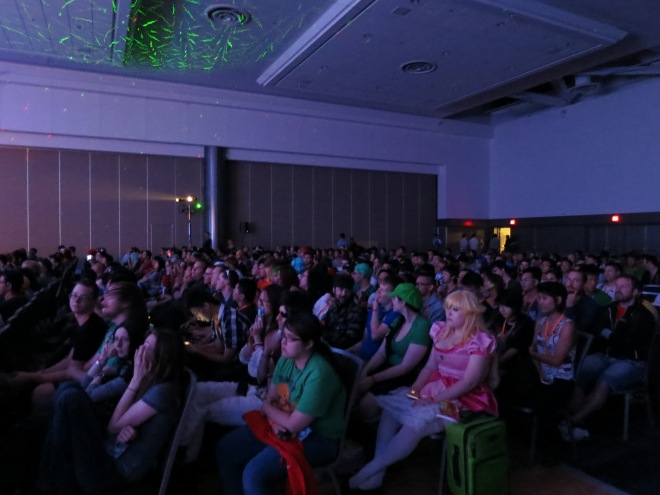 Just like I said before, the room was packed fairly quickly and people were denied entry once maximum capacity was reached due to fire and safety regulations.  On the bright side, there was a healthy mix of people here and it wasn’t as much of a one-sided afair as I thought it would be. People got seated and were fairly quiet for the most part except when asked to cheer or clap.

It took a little while and there were some technical difficulties, but after a while they managed to get it working smoothly to some degree. The MC came up and started introducing the other host for the swimsuit contest, and let’s just say they made a grand entrance in every sense of the word.

A person approached the stage in a speedo, while being covered by an elephant head. The word lewd doesn’t even begin to describe how awkward this was, but it was all in good fun and the MC and the person had a comedic exchange. Needless to say, the MC was not necessarily pleased by the appearance of this character and it led to some very interesting moments.

Not too long after that, the contestants filed onto the stage and the competition began. The contest was split into three parts: the introduction, talent show, and finally Q&A. Each of these parts are pretty much self-explanatory and left us with some great moments.

I tried my best to grab a picture of each contestant, but we were sitting quite far from the front, we actually didn’t know that press had better seating at this point and just sat where we were assigned. VIP and press passes are supposed to sit in the front two rows, but since it was day one, it was a bit disorganized and the rule was not really enforced. It became first come, first serve and it would be a detrimental in my attempt to take photos. No worries though, these things are bound to happen, and I personally wasn’t sure at the time if the seating at the front was reserved for VIP and press.

Our first contestant came onto the stage and was confident throughout most of her introduction. People were quite impressed by her and lots of people started cheering for her.

Next up was this guy, he was roleplaying fairly well and sparked up a crowd, or at least the ladies in the crowd.

Next up was a Riven roleplay, she tried to make some jokes about League of Legends. Sadly, not too many people got the jokes it seems and others kind of shouted random stuff back at her. It was quite disrespectful, but there isn’t much one can do about that in such a big setting. 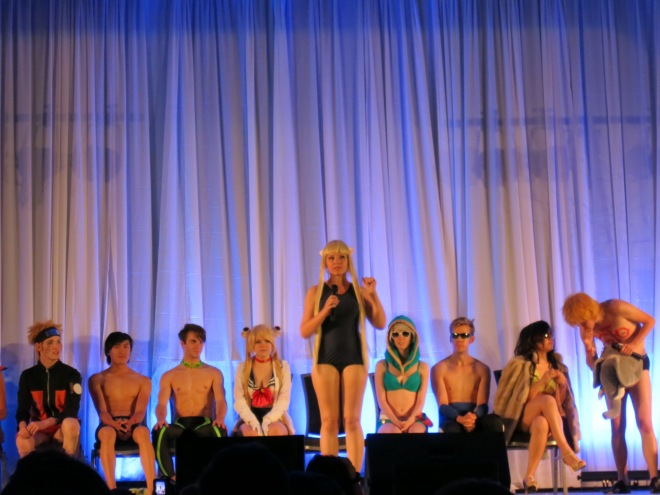 Next up was someone in a school swimsuit (Chii), someone requested I post up a picture of this one, so here it is. She was quite confident and it worked out for her.

What is there not to love about a Sailor Moon cosplay in a mizugi(swimsuit)? Seriously, she did a fairly good job with her costume. Props to her. o/ 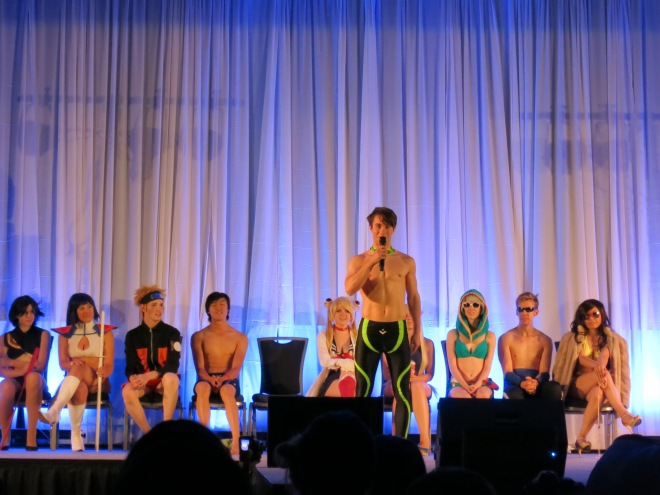 I don’t really recall off the top of my head what happened here. All I remember was someone screaming fujoshi bait or something like that. 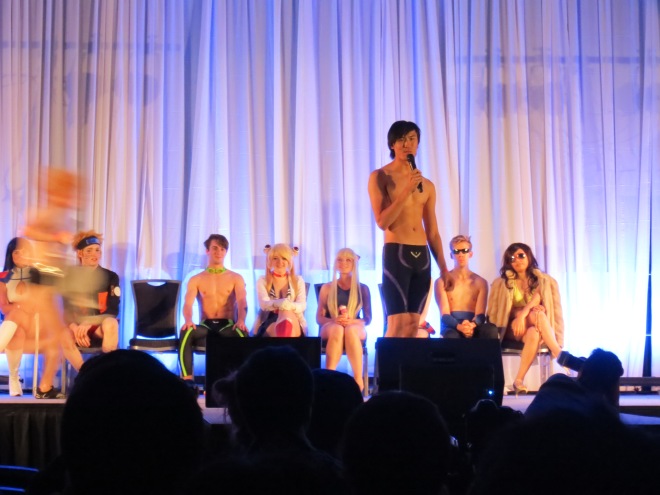 This was was slightly more memorable, as he said some things that got a lot of the ladies stirred up. Lots of girls were fangirling over this guy.

Naruto at a swimsuit contest, because why not? He did an interesting roleplay section here, not much else to say other than he was pretty funny.

Next up was a Satsuki and then a Ryuko, they did some introduction that was in their roles. It was interesting to see them both on the stage afterwards.

I completely forgot what this one talked about, but I think a lot of guys were talking about it afterwards. 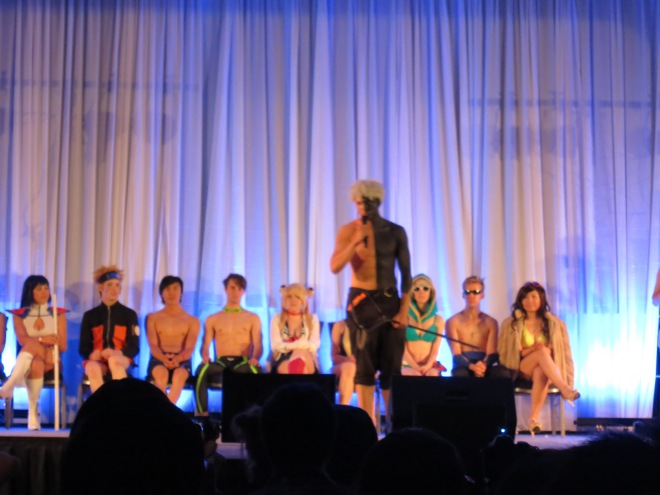 This guy put in a lot of effort to say the least, he got the crowd into it and things were working out for him in most cases. 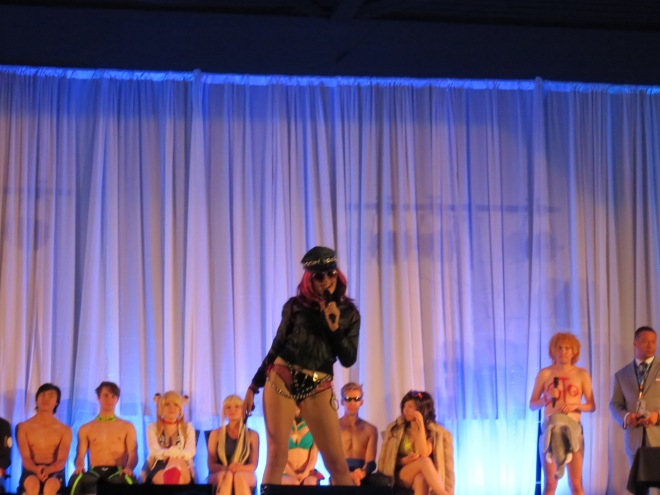 She called herself Poison, and she certainly fit that name well. She was by far the most “in character” and acted exactly how you would expect her to. 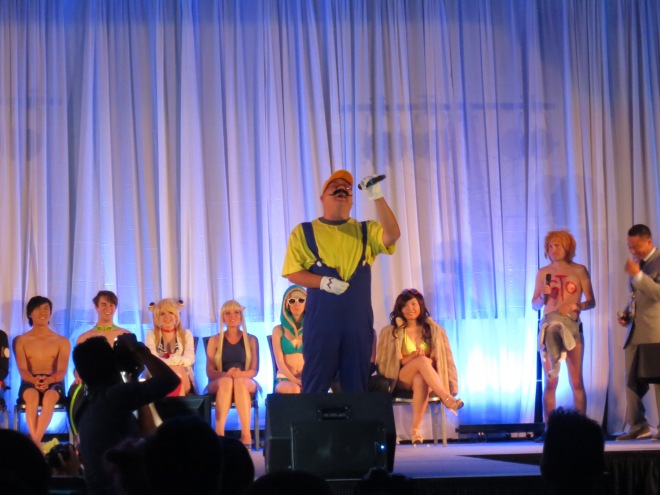 There’s nothing like a Wario to end off the line of competitors. He was certainly the most interesting one there and you’ll see why fairly shortly.

Winner of the fan choice award at the swimsuit contest. This was by far the most entertaining performance, everyone was on their feet by the end of it. (More videos will be posted here and on the Youtube channel.)

We ended off the night with one heck of an event, and I was crazy tired when we filed out of the convention center for the night. It was a little before midnight once the event ended, and that was it for Day 1 of Anime Revolution 2014 for me. This all just ties back to getting good sleep on Day 0 to prepare for such events.